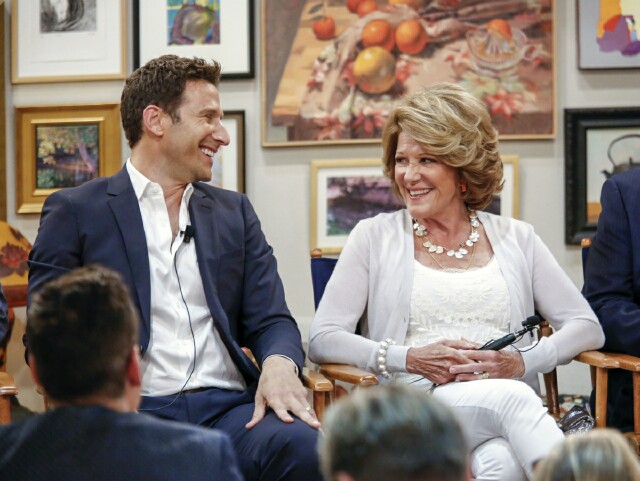 Beverly Hills, CA -- The air was heavy, unusually humid for Los Angeles, but it was fitting because Mark Feuerstein was on the famous New York street on the back lot at CBS Studios.  On a bench in front of a "donut store," the native New Yorker enthusiastically told me about his latest show, the comedy 9JKL.

We’ve talked over the years, but there’s an immediate bond as this show is set at 505 E. 79th Street, where Josh (Feuerstein) lives in an apartment between his parents, Judy and Harry (Linda Lavin, pictured at top with Feuerstein, and Elliott Gould) and his brother, Andrew (David Walton).  I know the building well as it was a selling point when my daughter moved into a walk-up across the street.  His (much nicer) building has a doorman and I had cautioned her to walk on that side of the block and then cross to hers. Now that doorman, building and the only-in-New-York set-up are fodder for 9JKL on CBS, premiering Monday, Oct. 2.

After Royal Pains, The West Wing and many other shows and films, Feuerstein is certainly accustomed to being in front of the camera.  This time, however, he’s also a co-creator and executive producer with his wife of 12 years, Dana Klein.

The transition has been fascinating for him, as he mines his life for plotlines.

So he draws from the wackiness of his family for the sitcom.  A few hours earlier, he and the cast gathered on the soundstage to meet with members of the Television Critics Association (see image below).  The 9JKL sets is on hallowed sitcom ground; The Mary Tyler Moore Show and Roseanne shot there.  Set designers replicated his parents’ apartment down to the Post-Its on the refrigerator, which is what they use in lieu of an address book. 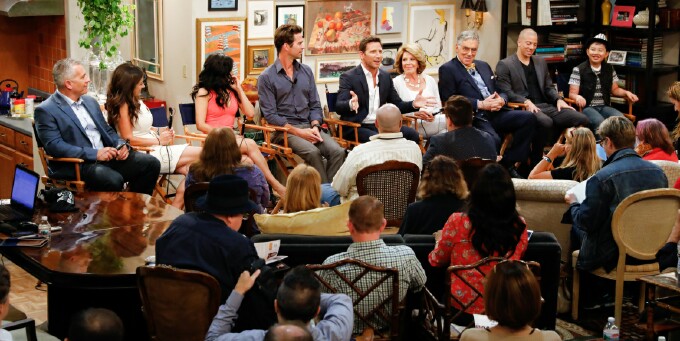 Lavin was a natural to play his mom.  “Mark and I played mother and son in a show in 1998 called Conrad Bloom, so I know how to be his mother,” she said.

While Gould, “sometimes seems as if he’s on his own planet,” Feuerstein confides, “he’s fantastic and he takes notes.”

There’s a genuine kindness to the show, evidenced in how Feuerstein talks about his parents and how the actors talk to one another.  Not every panel at TCA is like this.

Feuerstein, 46, acknowledges that when taking this on, “I was terrified to be in the writers’ room.  Even though the show is personal, I’m not an expert in three-act structure; my wife is.”

Klein was a writer and producer on Friends and Fresh off the Boat.  While Feuerstein was on Royal Pains he commuted between California, to spend time with her and their three children, and Manhattan, where he stayed in the 79th Street apartment between his parents’ and brother’s flats.

“Every morning, I would wake up to my father coming in in his tighty-whities going, ‘Mark, what would you like for breakfast?’” Feuerstein recalled. “Every night, after a 15‑hour day of shooting, my mother would be waiting by her door like a gunslinger in a nightgown.  The second my hand would touch the doorknob, she’d whip it open and go, ‘Hi, Mark.  Would you like to come in for a salad?’  Which, of course, I would do and sit with her from 11:00 till midnight talking about the day’s events.”

In the comedy, Josh is on a now-canceled show, Blind Cop, and is divorced.  The family is not one where boundaries are clearly drawn -- or drawn at all.  Feuerstein loves that whatever ethnic group sees it, thinks it’s about them.  “Italians are going, ‘Is that an Italian family?’  Russians ask if it’s about a Russian family.  Spanish people think it’s about them,” Feuerstein said.  “I say, ‘Yes!’ ”

Family dynamics are universal, though Walton is not the first actor one considers when casting Feuerstein’s brother.  Granted, siblings don’t always resemble one another, but Walton and Feuerstein as blood brothers is a stretch.  Feuerstein can’t help but laugh about that.

“If people accuse us of being too Jewish, we point to him,” he said.

The family could be nothing but, and Feuerstein said he’s “very proud to be Jewish,” adding that the show will feature the holidays and cultural touchstones.  This could open the door for all kinds of product placements (Kedem, Manischewitz, Zabar’s), but as of yet there are none.

“When we have a bike, I will contact my favorite bike company, Santa Cruz, and get a Santa Cruz bike,” he said.

As a producer Feuerstein has details to attend to that he didn’t as an actor.  For example, the morning after the TCA event there was a table read. Rather than just type it into his calendar, Feuerstein found himself reminding the other producers and actors.

Feuerstein, who was oddly crisp and unruffled while everyone else is wilting and messy in the stifling heat and humidity, said, “This is my Rocky.  It is my chance to be a writer and benefit by the writing.  I am so excited.”