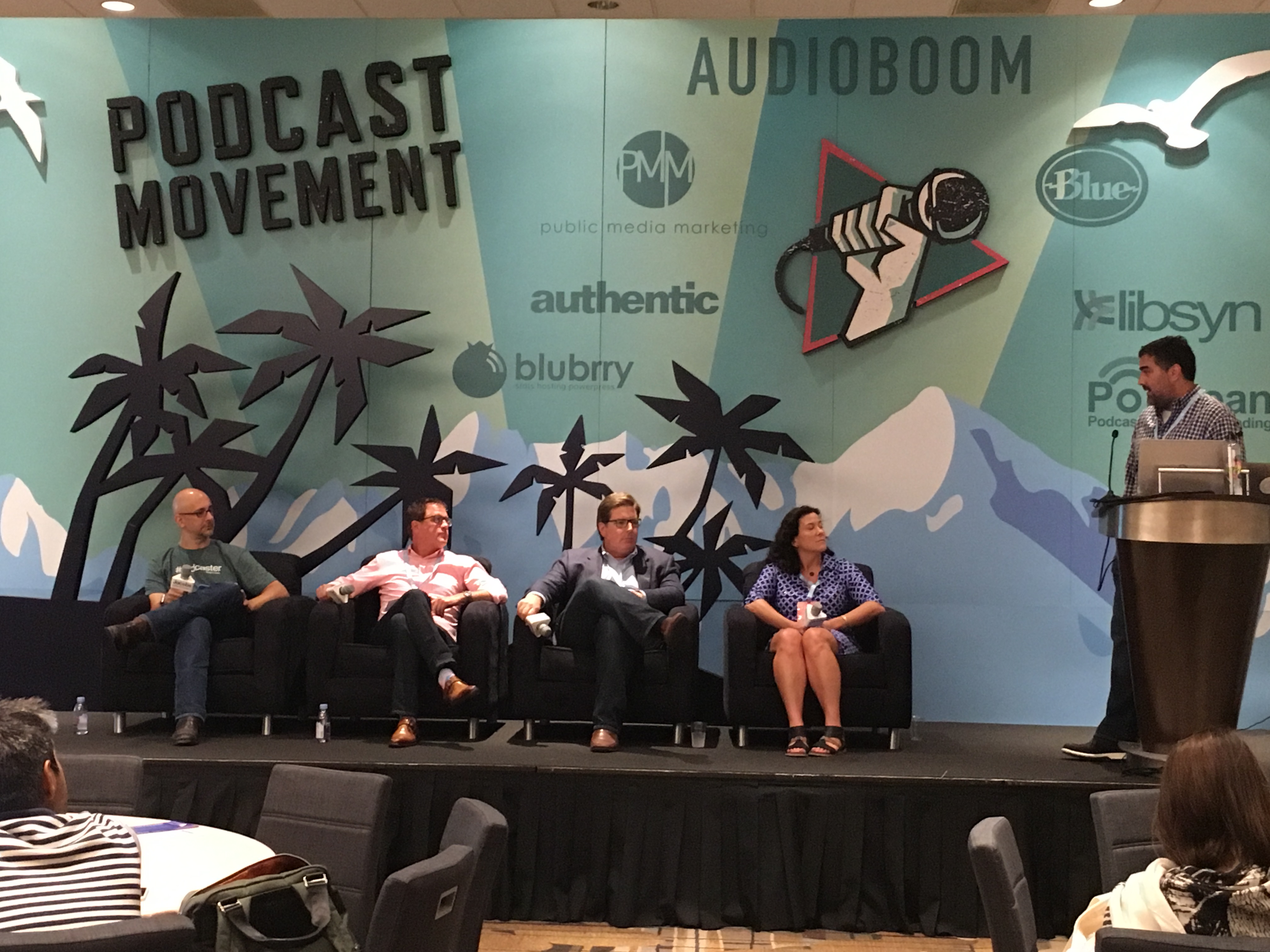 Some 1600 podcast hosts, marketers, producers, agency executives and tech providers descended on Anaheim, CA, last week to attend the 4th Annual Podcast Movement.  With scores of sessions on everything from production and mic use to sales strategy and social media, the conference has steadily grown in participation and panache.  About 60 of those attendees eagerly listened at one session designed to answer the question radio broadcasters keep asking: "How do we make money with this thing?" The answers from a panel of monetization experts were couched in some tough love and encouraged broadcasters to embrace podcasting ... properly.

Rob McCracken, Director in the Digital Solutions Group for the E.W. Scripps Company -- which owns podcast content network Midroll Media and listening platform, Stitcher -- bluntly advised the broadcasters, "You've got to realize your listeners are going to go to on-demand.  You should be the one to walk them there.  You've got to be committed to it, package them -- not with CPMs, but with promos and on-air elements ... like, 'If you missed this radio show, catch it on demand,' with a sponsored 'brought to you by' tag."

On air promotions of podcasts have not been that big a driver for NPR, according to moderator Bryan Moffett, Chief Operating Officer of National Public Media (NPM), a subsidiary of NPR, but McCracken said Scripps/Midroll "packages everything with on-air as well digital.  We're doing that with television as well -- like with Alexa Flash Briefings there are TV ads for sponsors that are pre-roll and post-roll because we know just like with most podcasts we just don't have the scale yet and to start monetizing this.  The value is still in on-air."  With that they also see more people going to podcasts as a result.

John Rosso, President of Market Development at Triton Digital, is more cautiously optimistic about podcasting, but described the current state of radio's uptake of the platform this way: "I think what we're experiencing now with podcasting is like when stations had streams but didn't know how to monetize them.  Their first question is 'can you help me fill this inventory?'  That's great for remnant but you have to harness your sales team and figure out how to sell [podcasts]."

Sarah Van Mosel, Chief Podcast Sales and Strategy Officer, Market Enginuity, also encouraged broadcasters to embrace education and training as a way to court the ad buying community.  "At WNYC in 2010, RadioLab had about 3 million downloads a month," she explained from her storied history at New York Public Radio.  Forty percent of new listener traffic, though, was to the back catalogue of evergreen content.  "We didn't know how to get the ads onto it to take advantage of that longtail," she said.  "The first thing we had to do was figure how to take advantage of that."  She described the network's learning curve in monetizing it.  That understanding has to be shared with deep sales training on podcasting.  "Your sellers can't educate buyers if they're not educated," she said.  "People have a lot of confusion the way podcast metrics work ... the way tags work ..." and sellers need to provide the clarity.

Rosso continued a cautionary tale with, "No one should be going out the door with a CPM strategy to sell podcasts.  Don't try to overly digitize the medium.  Network radio sells on audience estimates ... don't let that creep into the podcast business.  We all already know [podcasting] works very well."

"You're never going to establish value the cost of a podcast if you're selling on a CPM," McCracken added.  "[Midroll] sells on 'share of voice.'"

"I've experienced scale and no scale," a more measured Van Mosel countered.  "I'd disagree on the no CPM basis -- or create scale of a different sort.  At aCast, we had 800 shows and we'd group them together to create that scale in verticals (e.g.: group all women's shows)."  Now she has 16 teams doing local sales of local radio and network podcasts.  But it still requires an educated sales force that can explain what geotargeting is.

While the perception is that any spot rate measures put podcasting at a premium, the engagement -- as Moffett reiterated -- from recent surveys, the purchase influence of podcasters is exponentially greater.  McCracken noted, and Moffett agreed, that budgets can be balanced with a hybrid flight: live (or host) reads in the beginning of the flight at premium rates can be balanced with lower cost dynamic inserted ads in the back catalogue.

Rosso reminded the attendees that some think dynamic insertion means "you're going to start hearing that Geico ad.  It doesn't have to be that prerecorded radio ad," he explained.  A host-read spot can still be dropped in dynamically.

There was also a caution flag thrown on programmatic for podcasting.  "The value of programmatic is real or near time," Rosso continued.  "In podcasting, because you're not using a browser-based player most times you don't know if ad ran.  So, it's not a great fit for a podcast buyer sitting at a trading desk." Then there is also the battle of pricing perception.  Digital buyers are "constantly being trained to price lower and lower and lower," said Rosso.

All agreed on the need to have empathy for ad agencies, as well.  Rob Walch, Vice President of Podcaster Relations for hosting giant Libsyn, reminded broadcasters that buying podcasting "is more work and buyers are already stressed."  Sellers are faced with convincing buyers "to do more work on a smaller medium."

But, as Van Mosel pointed out, agencies are "willing to go there.  They still buy it, because why?  Because it's so effective.  'I want to be a good agency and do right for my client.'  It's a leap of faith."  Among the many benefits to podcast advertising are its comparatively "low ad loads, and no one's ruined it yet ... for the most part," she joked, sort of.