The CW's "All American: Homecoming": As Solid as its Series of Origin 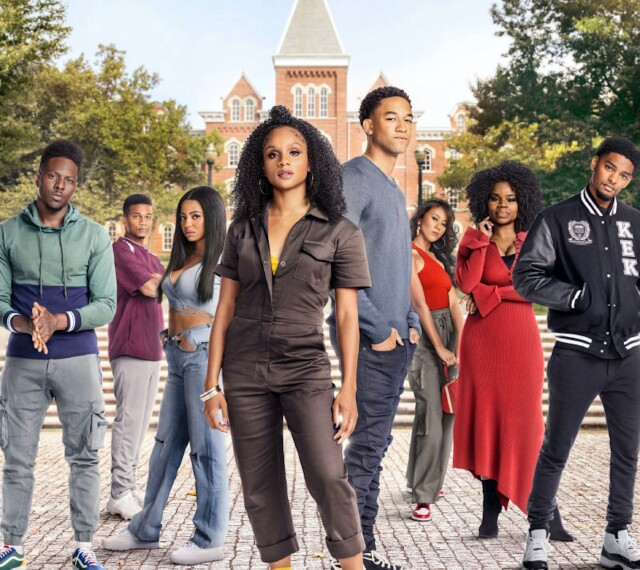 After four successful seasons, The CW's sports-centered teen dramaAll Americanhas accomplished something few shows get to do: It has launched a solid spin-off that is equally deserving of a long run. I'm talking All American: Homecoming, which follows a character or two from the original series right on over to fictional, Atlanta-based Bringston University, shining a welcome spotlight on the HBCU experience in the process. Now of course, my first thoughts when it comes to depictions of the young Black college experience are all about Netflix's Dear White People and the movie Drumline. That says one of two things: Either I haven't been seeing enough of them, or there aren't too many to choose from.

The most highly revered fictional HBCUs were mostly brought to us via classic Black films -- whether it be Mission College from Spike Lee's School Daze or Drumline's Atlanta A&T University -- but the real longevity is the kind that comes with the popularity of a long-term endeavor, not unlike that of a successful television series. So, the real question is, can the newly minted Bringston University be for the culture today what A Different World's Hillman University was in the past?

Created and executive produced by Nkechi Okoro (who is also an executive producer of All American), AA:H continues the story of Simone Hicks (Geffri Maya), who in the original series was navigating the pitfalls of teen pregnancy and potential single motherhood but now starts a new chapter in her life by chasing her tennis dreams as a freshman at Bringston. Also at Bringston is our other lead character, Damon Sims (Peyton "Alex" Smith), an athlete so good that he turned down the MLB to play at the university in order to use his star power to save its failing baseball program. Also in the cast is Leonard Roberts as Bringston's, president Zeke Allen. (He played Sean, a drum line leader in Drumline.)

AA:H is as solid as it's series of origin. It's themes of Black solidarity and respect for the culture run deep, with its focus being on people of color and their trials and tribulations when dealing with their own in the pursuit of excellence. Excellence that, as Simone puts it herself, "is expected."

That expectation might be one of the most realistic things about this series. Though I personally went the way of the way of the college dropout, I've both witnessed and felt first-hand the effects of high-pressure situations like the one Simone faces in the series. In the second episode, she finds herself having a full-on panic attack at the realization of exactly how much pressure she was under to succeed. It's a familiar place that many new college students find themselves in, even more so in this day and age of Zoom and doom.

To put it the way another Bringston student put it, "With everything going on in the world right now, it just felt right -- being with our people."

It's refreshing, in a way. You see, the premise of All American: Homecoming is that the university's previous baseball coach created fake classes for his players to take, which allowed them to fraudulently maintain their grade requirements without the pesky business of actually learning. This isn't unlike a certain celebrity involved academic scandal that we were all hearing about just a few months ago (or so it feels). I know an academic scandal isn't a positive thing, but it's also about time that we see at least our fictional people of color commit the kind of crimes that real life rich white ladies do. The lady from Full House wasn't exercising the privilege being white gives you. She was exercising the privilege that being wealthy gets you. Well, Black people are wealthy, too.

I think this is one of those times when the vibe is pretty spot on, if that's makes sense, at least regarding atmosphere and casting. This particular configuration of personality types, pronouns and complexions feels more accurate and relatable then most other works that attempt the same, and Homecoming accomplishes it all without putting any extra emphasis on either. It one of those things that goes unnoticed when it's being done correctly, and even though I noticed, this show is still doing an impeccable job of it.

So, does All American: Homecoming's Bringston University make the cut, as far as iconic fictional HBCUs go? Honestly, only time will bring the true answer to that question. My verdict? I believe that the fictional Bringston and its students bring more to the culture than they could have ever possibly detracted, and as long as the series continues to bring the authentic and engaging Black college experience that it's been providing, then it's success will be just that -- a matter of time.