The Dodo Is Back to Save Us All 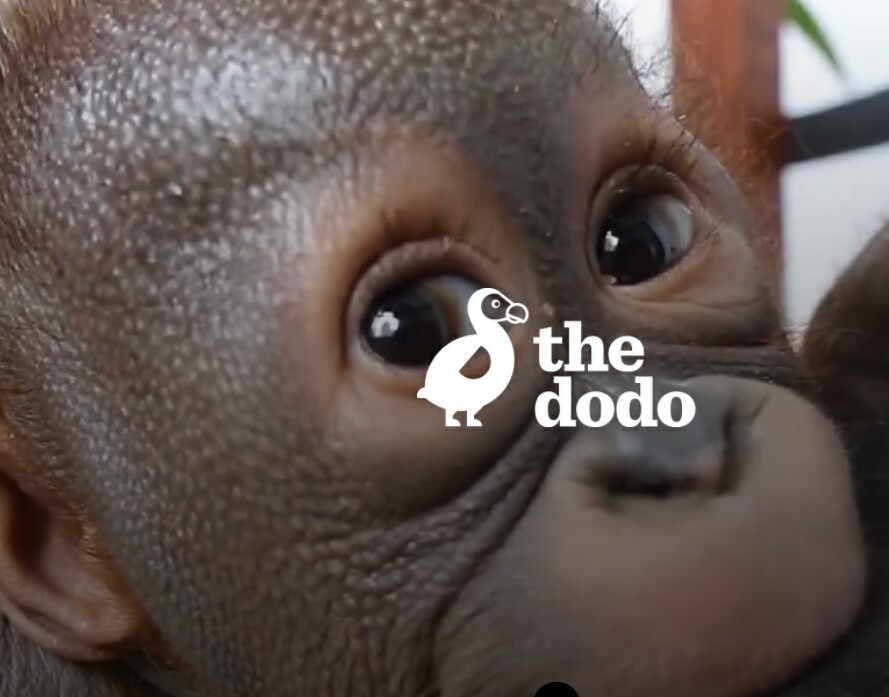 The original may be extinct, but the new model has enough heart to be with us forever.  I consider Group Nine Media's The Dodo to be an essential display of mankind at its best and critters at their cutest -- and an ongoing reminder that humans are fortunate enough to share this planet with countless other fascinating creatures.

Hour by hour the media brings us new tales of terror, trouble or, at the least, turmoil.  All of it matters, and all of us are distressed by it for one reason or another.  There is no place where the differences between people that seemingly erupted out of nowhere just over a year ago are more soul-darkening than on social media; a valuable source for news, an open platform for free assembly and a toxic breeding ground for haters, baiters and bullies alike – all comingled in a way that can make anyone want to hide.  It brings out the worst in us.  And yet we cannot look away.

Fortunately the antidote can be omnipresent, as well.  That would be The Dodo, a digital platform that showcases not only cute animals doing adorable things but kindhearted humans doing whatever they need to do to save creatures of all kinds that are in trouble.  It is an intoxicating mix, expertly executed for maximum feels.  When included in one’s social feed, The Dodo frequently reminds us that even in the darkest times when the media would have us believe that monsters lurk around every corner there are countless people out there who are so full of love and compassion and so utterly selfless that it is remarkable their hearts don’t burst.  Mine sometimes feels like it will when something like this turns up on Twitter: 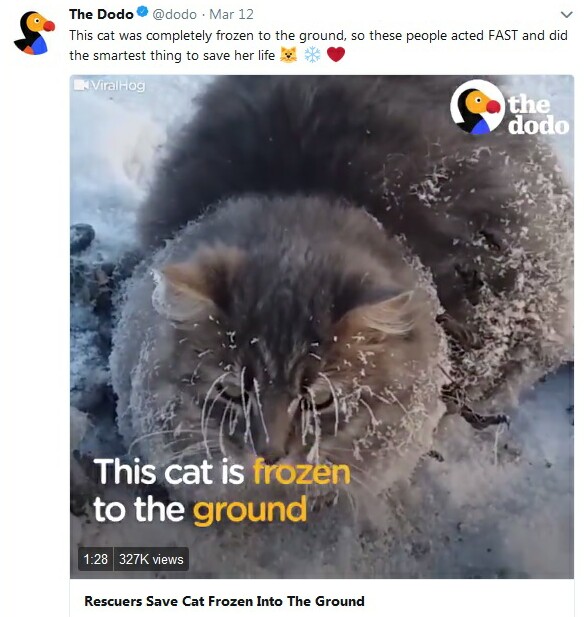 The Dodo is, in the simplest terms, a platform featuring short, Insta-perfect videos of animals in all sorts of situations -- and, more to the point, of people doing magnificent things for helpless animals, even at their own risk.  The compassion on display extends well beyond the standard puppies and kittens – though there are plenty of heart-melting stories about felines and canines that had been abandoned or abused being rehabilitated by angels on earth.  The Dodo mix has included hairy spiders, deadly snakes and mammoth manatees, among many others. 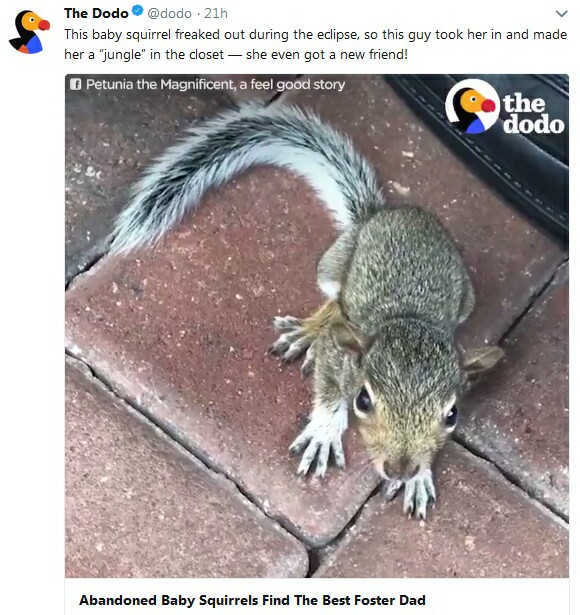 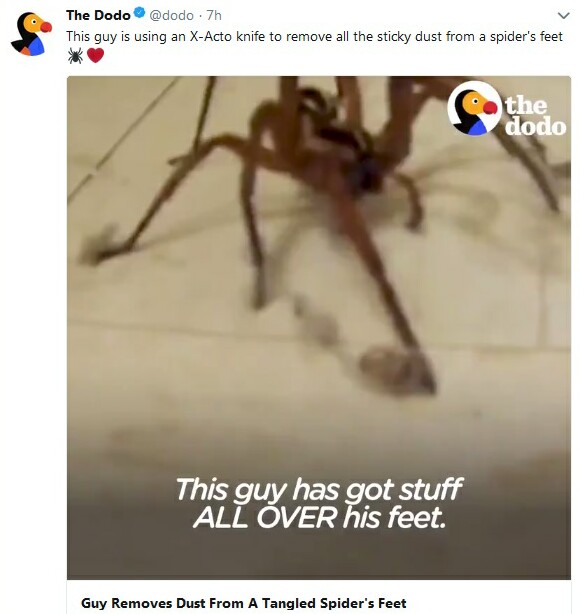 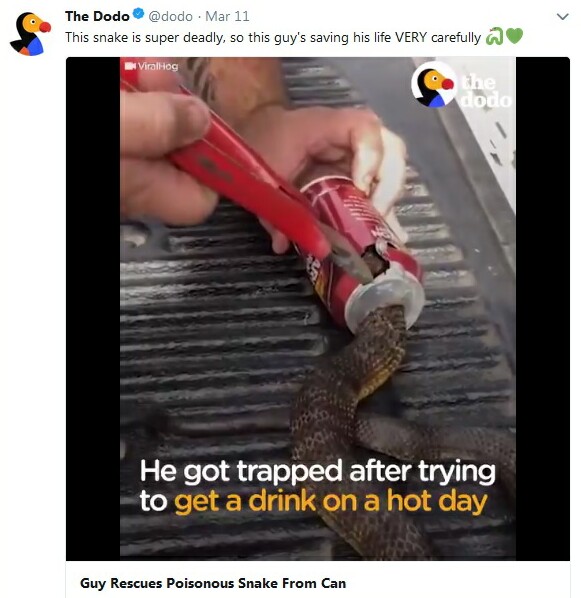 All of these videos are closed-captioned for quiet consumption at any time, including an endless class, a boring business meeting or a tedious social occasion.  Or any moment when one might feel the need for a respite from the crap of the day.  (I don't seek them out; I prefer to be surprised by fresh Dodos when I'm on Twitter or Instagram.)  The videos are also graphically embellished in ways that make them even more emotionally connective.

I recently tweeted that if everyone followed The Dodo on the social media of their choice the world would be a more loving, chill place.  The inspiration is contagious, the kindness on display profound.  How wonderful it is to be reminded at any moment that there are everyday people out there who rescue and nurture baby squirrels and tiny sea turtles and dangerous reptiles, or take in homeless dogs that find their way to their home, or help out abused farm animals.

Find The Dodo right now if you’re having a bad day; or even if you are having a good one.  You’ll see what I mean.

Ads now appear at the beginning of each Dodo clip.  (Ads and sponsorships are also incorporated into Dodo's tweets, as illustrated by the promo for Netflix's remake of Benjiin the image below.)  I don’t mind at all.  They’re super-quick and easily passed over after a few seconds.  These advertisers are supporting little stories of mankind at its very best.  In these days of advertiser concerns over adjacency to potentially objectionable content, I imagine the line of sponsors waiting to secure time on The Dodo is growing as you read this. 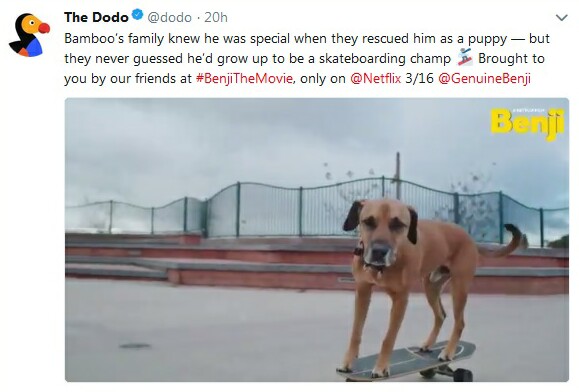 Happily, The Dodo is expanding its reach.  Its first television series, titled Dodo Heroes, will debut on Animal Planet on June 9.  Meanwhile, season two of its Facebook Watch program Comeback Kids: Animal Edition premieres March 24.  (It will also run on Twitter and YouTube starting March 25.)  Maybe these series will have the same impact on others as its current format has had on me.  But I think The Dodo serves a stronger purpose where it lives right now, on social media, interrupting our daily flow of despair with much-needed reminders of how wonderful people can be.

Television personality and motivational speaker Jason Silva made a name for himself delivering Shots of Awe.

The Dodo is accomplishing something even greater, delivering Shots of Awwww.