The Snap on Crackle and Pop: Upfront News and Views 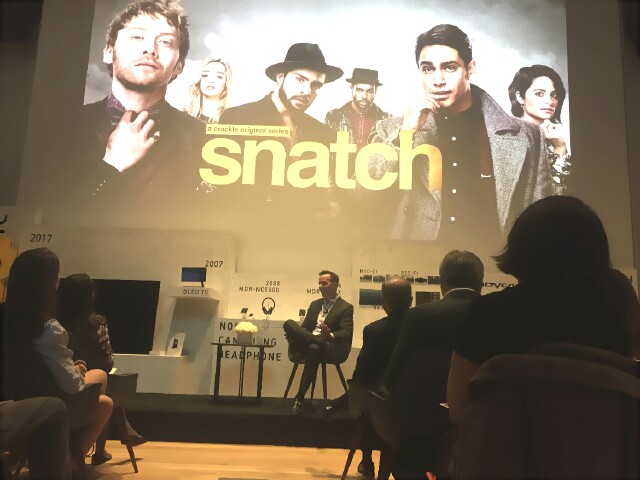 Crackle, Sony's digital/streamed programming service available through smart TV sets and devices such as Apple TV and Roku, moved away from its lavish Upfront spectacles of the past three years for a set of intimate, debriefing-style events this past Wednesday. The first one was for press; others were attended by advertising agency executives.

Venue: The Innovation and Design space adjacent to the first floor of Sony Square, on the corner of Madison Avenue and E. 25th St.  A living timeline of Sony technology from the Walkman to PlayStation surrounded a raised platform with lounge chair and table, plus giant screen above. Attendees sat in rows of orange and gray chairs, and sofas along the back rows. Breakfast appetizers, juice, coffee and tea were served while guests checked out the exhibits, including a test run of PlayStation's virtual reality-capable console. Grade: 3.5 Jacks

Presentation:  Count on Crackle to A) create more original programming for "connected entertainment enthusiasts" -- a growing viewer psychographic of video gamers who want more immersive TV experiences -- and B) accompany those original shows with limited commercial interruption and VR components.  "These enthusiasts are open to many influences, not self-centered, and co-view TV with others," explained Eric Berger (pictured at top), Crackle's General Manager and Digital Executive Vice President of Sony Pictures Television Networks.  "Every original series we do will keep this audience in mind."  This strategy was reached via an online survey of 1,500 gamers (67 percent male/33 percent female) conducted over the last month by Miner and Co.  On another note, the Break-Free advertising initiative launched last fall, in which original series episodes carried just five ad spots, each one by a specific sponsor, provoked double-digit increases in brand recall and intent to purchase products. A substantial number of viewers giving feedback on Break-Free described their ad-watching as entertaining or creative -- and they said it encouraged them to binge-watch more episodes of a series at one time.  Current clients include Microsoft, Sprint and General Motors' Cadillac division.  The practice will be expanded, in part from creation of special vignettes from Mashable and The A.V. Club. Grade: 3.5 Jacks

News:  The Oath, a saga of Los Angeles police submerged into the gang subculture, will debut later this year, executive produced by Curtis "50 Cent" Jackson.  He will also develop one of four series prospects under consideration for 2018 -- RPM, where a Boston used-car salesman moonlights as a getaway driver for a leading crime syndicate. The other three are Accident Park (comedy involving a theme park on the skids), Tribes (dystopian drama set 20 years from now in a tribal-cultured U.S.) and The Row (prison inmates face a choice -- stay on death row or go on a dangerous space mission). Current originals StartUp, Snatch and SuperMansion will return for new seasons, while The Art of More remains in review for a third season.  Separately, Heroes creator Tim Kring will co-produce In the Cloud, a made-for movie with a technology-driven plot.  Grade: 3 Jacks

Host:  Berger, relaxed in his lounge chair and reading off a tablet on his lap, maintained a solid pace and sound demeanor.  With the rows arranged for guests in a semi-circle, his remarks were given in an intimate atmosphere. Grade: 3.5 Jacks

Star Time:  There weren’t any celebrities on hand to greet or perform; therefore no Jacks grade.

Data Insight: Ninety percent or more of those online survey takers use gaming as a break in their daily routine, believe their console time is an immersive experience and prefer to stream the content they want to catch. Seventy-six percent prefer to see streamed advertising vs. broadcast or cable network messages.  Grade: 3 Jacks

Innovative Opportunity:  Launching a new series next month that spotlights coming Crackle attractions. This Week On, with Smosh star Ian Hecox as host, will begin next month. Grade: 3 Jacks

Special Note:  Could Outsiders, the Sony-produced drama cancelled last week by WGN America, come to Crackle for a third season?  Sony officials I spoke with post-presentation acknowledged that it is an interesting idea. Beyond that, no comment.

Overall Grade: 3.5 Jacks   An engaging presentation and space to offer it.  More series commitments would have moved the grade up a notch.

Now for some key takeaways from Pop’s round of debriefings with reporters last week, originating from the midtown Manhattan headquarters of co-owner CBS:

The primetime focus is more on scripted series, less on unscripted series.  Comedies Hot Date and Swedish Dicks, Private Investigators (starring Keanu Reeves) get a fall 2017 launch, followed by one-hour drama Clique in early 2018. That's a shift from the last two years, where unscripted was the in thing.  Also, Wolf Creek, the miniseries derived from the popular horror films, will get another miniseries go next year.

From here on, most scripted or unscripted series development will have a star connection, in front of or behind the camera.  Example: Jessica Jones star Krysten Ritter is working on monster-minded scripted original The Demons of Dorian Gunn.  Sarah Jessica Parker's slate of projects includes comedy anthology It’s a Date.  Way-off-the-beaten-path comedies in the development hopper include Peaches (person born as a boy but raised as a girl) and Two Princes (Prince Charming dumps Cinderella in 2018 and heads for Venice Beach).

Pop will be an unexpected off-ABC home of The Goldbergs this fall.  Initially, Goldbergs maker Sony made a deal to launch reruns exclusively on Tribune Media stations, prior to a general syndication rollout next fall (as reported elsewhere on MediaVillage.com).  Apparently, Sony decided to bind the Tribune agreement with a cable network, with Pop the taker.

With CBS as co-owner, it remains to be seen if Pop will serve as a second window for such CBS All Access originals as The Good Fight and the upcoming Star Trek: Discovery.  Looks like we'll have to wait and learn.