The Weaponization of the Term "Conspiracy Theorist" 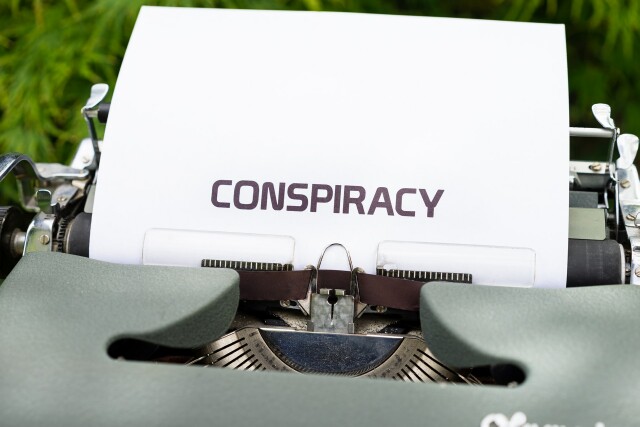 On September 15, 1995, the economist Thomas Sowell joined Charlie Rose for a discussion on his book The Vision of the Anointed, which was to be published that fall, as well as a broader conversation about Sowell's views. During a portion of the interview in which Sowell was discussing the putative ideological similarity of those at influential institutions (particularly on favored social programs) most notably Harvard, Yale and The New York Times, Rose, in a slightly raised tone of voice, said to Sowell: "What amazes me is that you buy into these conspiracies like this." In response, Sowell defended himself: "It's not a conspiracy at all. I've never believed in conspiracy theories." Sowell then explained how he came to hold this view, given the shared ideological assumptions held by many of his fellow intellectuals. And as James Lindsay noted this July, along with available evidence now confirming Sowell's central claim, it seems as if the economist was correct all along.

And this is just one instance of accounts once dismissed as "conspiracy theories" turning out, in time, to have been accurate, from Big Tech putting its thumb on the scale when it comes to search results to various COVID-19 mitigation measures, particularly in Australia, vindicating the concerns of those who feared they would invariably come at the expense of respecting civil liberties.

In a recent interview prompted by a desire to reflect on the COVID-19 pandemic, the New York University media studies professor Mark Crispin Miller stated, "When someone calls you a 'conspiracy theorist,' they have already lost the argument because that epithet is a way to prevent discussion from taking place." Although I do not agree with many of the specific explanations that Miller has put forward about controversial events (explanations his critics might label "conspiracy theories"), I believe his analysis here to be correct. To call someone advancing a certain argument a "conspiracy theorist" amounts to a specialized form of ad hominem attack, and similar to invoking many other "ists," it can be used as a cudgel to stop a conversation in its tracks.

Now, there are certainly cases of conspiracy theories that are particularly outlandish and dislodged from reality. One that comes to mind concerns the events surrounding the 2019 murder of reputed Gambino crime family boss Frank Cali, in which Anthony Comello, who had reportedly previously dated Cali's niece, shot and killed the alleged mobster believing him to be a member of a "deep state" conspiracy against then-President Donald Trump after having first attempted a citizen's arrest on Cali. Comello, who had previously also sought to make a citizen's arrest of Mayor Bill de Blasio, would later be judged mentally unfit to stand trial. In this case, the narrative to which Comello was subscribing can accurately and reasonably be labeled a conspiracy theory.

My effort here, though, is not to wade into determining which narratives commonly labeled "conspiracy theories" deserve that description and which do not, or even to formulate a rough attempt at an a priori framework to evaluate what might be a true "conspiracy theory" and what might be a reasonable but unpopular explanation for a series of events. Rather, it is to draw attention to a particular tactic in which media pundits and government actors can seek to explain away legitimate questions by dismissing those who ask them as "conspiracy theorists."

Much of the renewed, recent attention to the use of the term "conspiracy theorist" is attributable to the about-face many political figures, pundits and members of intelligence agencies have displayed when it comes to the origins of COVID-19. As a number of compiled video montages make clear, it was not long ago that to posit any alternative theory to the one initially put forward by China was to engage in an intolerable act of conspiracy theorizing. However, come May of this year when President Joe Biden ordered intelligence agencies to investigate further if COVID-19 had, in fact, come from a Chinese lab, pundits were now discussing a theory that up until a few days before would have gotten one's YouTube post "demonetized or deleted" or resulted in one being laughed out of polite society.

When I was in school, I recall my one Yale political science professor telling our class that "No one believes every conspiracy theory, but everyone believes at least one." Perhaps some believed the one that Comello did or others that are particularly outlandish and that many find deeply offensive. But there are also ones that are believed to be true by a plurality of poll respondents, which invites debate about when a particular narrative deserves this label. Is it when trusted sources deem it as such; alternatively, should it be contingent on the views of a majority or plurality of survey respondents?

The one that I have always found deserving of particular attention concerns the 2013 death of Michael Hastings, a journalist well-known for covering mass surveillance and the Obama administration's drone program and the author of the 2008 book I Lost My Love in Baghdad. In June of 2013, Hastings was at work on a profile of then-CIA Director John Brennan and was anxious that he was being surveilled by federal law enforcement. In the days preceding his death in a strange automobile accident in Los Angeles, he had expressed concerns his car was being tampered with, even asking his neighbor to borrow her car because of that reason just hours before his death. Then, in the early morning hours of June 18, 2013, his car crashed into a palm tree at maximum speed, with the car's engine being launched nearly 60 yards from the crash site and his body being burned beyond recognition, two facts rarely seen in a typical car accident. This prompted counter­terrorism expert Richard Clarke to tell The Huffington Post, "My rule has always been you don't knock down a conspiracy theory until you can prove it [wrong]. And in the case of Michael Hastings, what evidence is available publicly is consistent with a car cyber-attack." The Huffington Post'sdecision to lend credence to this interpretation did prompt critical pieces in other outlets, including Politico. (Hastings' brother, Jonathan, believes Michael's death to be more likely the result of a manic episode exacerbated by potential drug use.)

None of this is to say there is no such thing as a conspiracy theory; there undoubtedly is, and as the political scientist Matt McManus has argued, people often believe in conspiracy theories as an alternative to accepting the randomness of events in the world and the concomitant sense of powerlessness that can inspire. At the same time, however, certain political and media figures can discredit those asking legitimate questions by calling them "conspiracy theorists" and thereby shut down discussions, especially when certain sacred cows from modern monetary theory to favored explanations about COVID-19 find themselves in the crosshairs.