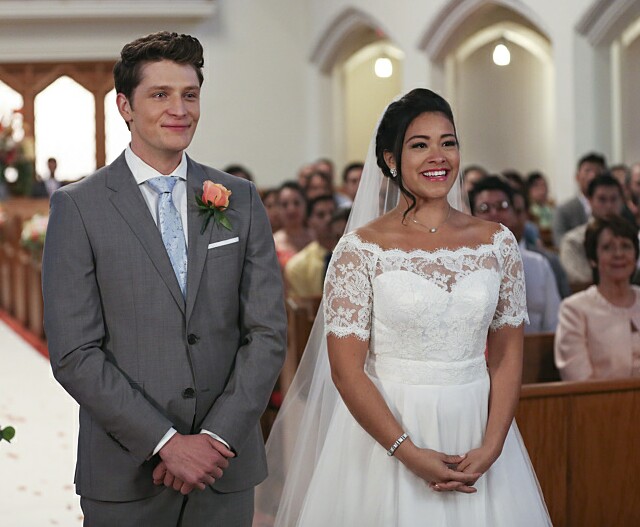 Two of the most successful program formats in the history of television have in recent years eroded to the point of near-oblivion – daytime dramas and prime-time soap operas. Those of us who have always appreciated both genres – which thrived in the Eighties and Nineties, then began to drop away with the approach of the new Millennium and the rise of the Internet – have never accepted the idea that people simply were not interested in ongoing, emotion-powered sagas about families, friends and communities.

This certainly wasn’t the issue for Latino audiences, for whom telenovelas were still (and continued to be) exciting and essential entertainment. Network executives and navel-gazing critics, on the other hand, seemed not to care at all. And then something wonderful happened. We met Jane Villanueva.

Now in its third season, Jane the Virgin continues to prove everyone wrong on the subject of serials. Structured and produced in a manner inspired by telenovelas, but written as a twisty ongoing story in the manner of the great prime time soap operas and defined by a heady mix of the kind of over-the-top plot upheavals and moments of pure emotional intimacy that characterize daytime drama at its best, Jane remains the real deal. Further, its success proves something else that television executives are still a little slow to realize – people of every background will watch shows about people of every background if they are dynamically written, excitingly executed, exceedingly well cast and acted with heartfelt conviction.

Jane has from the start been enhanced by all of that and more – and by one of the finest casts working in television today. Their performances are uniformly flawless and heartfelt -- that's a big reason why the emotional connectivity of this show has never let up. Everyone reading this likely knows somebody who fretted all summer long about the fate of Jane’s husband Michael (Brett Dier), who was shot last spring in the season two cliffhanger finale. Rare is the primetime serial drama these days that sparks the kind of cliffhanger excitement that was once commonplace in the days of Dallas, Dynasty, Knots Landing and Melrose Place.

Why the audience for Jane the Virgin isn’t larger than it is remains one of the major television mysteries of the decade. Ditto the lack of love from voting members of the Academy of Television Arts & Sciences, especially in their perpetual failure to honor sparkling star Gina Rodriguez (pictured at top with Brett Dier) and, to single out one member of the supporting cast, her irrepressible and irresistible co-star Jaime Camil, who plays Jane’s biological father, telenovela star Rogelio de la Vega.

Audience size is also an issue for the other great CW series about a woman finding her way in the world, Crazy Ex-Girlfriend, one of the most inventive and addictive shows on television, and one that continues to struggle to be noticed, except by critics, who never stop lauding it as one of the medium’s best. How can they not?  Every episode is essentially a mini-musical featuring songs written by and frequently performed by the series’ seemingly indefatigable star Rachel Bloom (pictured below center). This is no lightweight musical rom-com; there is much personal despair and emotional devastation on display, even in the show’s kinetic production numbers. Bloom and her co-stars hold nothing back. 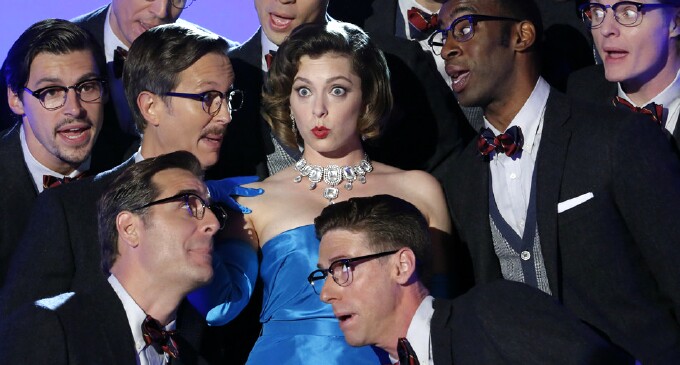 There is nothing else like Crazy Ex in series television, and in fact there may never have been. (Comparisons to Steven Bochco’s legendary failure Cop Rock, a poorly conceived musical drama, are not at all accurate.)  It is a marvel of modern media. I’m somewhat amazed that it landed on a broadcast network, and that said network continues to stand by it. This is the kind of bold risk-taking that has taken The CW from a bargain-basement network wannabe to a broadcast trailblazer.

Finally, while on the subject of strong women on The CW, here’s a quick show of support for Supergirl, which began life on CBS and moved over to its smaller sibling earlier this year. It is still a perfectly likeable show, but it is simply not the same without the essential weekly contributions of Calista Flockhart as self-made media mogul Cat Grant and mentor to the title hero’s human persona, eager young Kara Danvers (cousin to Superman), played by Melissa Benoist.  The many marvelous scenes between Benoist and Flockhart (pictured below) were the best thing about Supergirl, many of them played in the visually striking offices of CatCo, the global media empire built by Grant that is headquartered atop a skyscraper in fictional National City. I was Team Marvel in my youth, and one thing that always struck me about the many stories Stan Lee wrote was that they took place up in the sky, generally because most Marvel heroes lived in New York City and did battle with villains high above the city. I don’t know if D.C. books were similarly blue sky, but those scenes in the CatCo offices always brought me back to the Baxter Building. 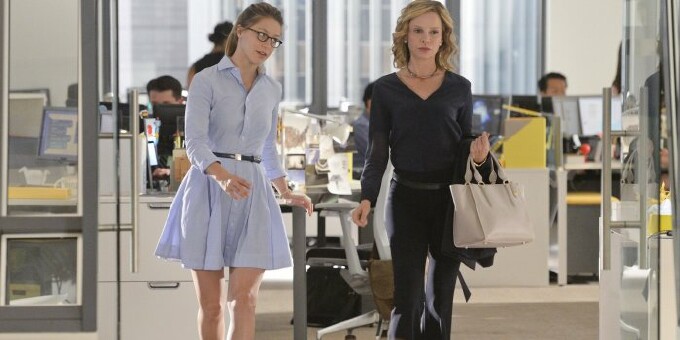 With Flockhart now largely absent from the show (is she officially gone or not?) something rather extraordinary has been lost – an ongoing and inspirational story about the fractious but mutually respectful and caring relationship between two women, one a mentor, the other a mentee, each with a lot to learn from the other. It was a beautiful thing. Supergirl is not going to be the same until that relationship is restored, even if that means a painful recast of the Cat character. Unthinkable and unlikely, yes. But necessary, I think, if this show is to soar once again.

Previously in the Top 25 Countdown:

No. 13:House Hunters and All Things HGTV

No. 17: Colorized Classics on CBS

No. 21: Return of The Exorcist