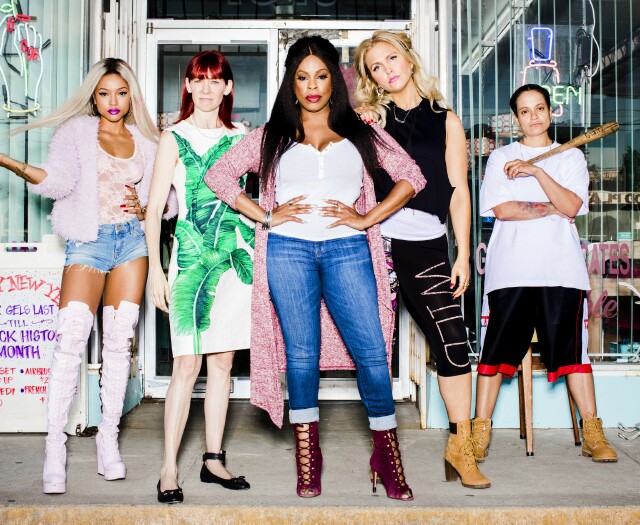 Pasadena, CA -- Set in a nail salon with attitude and felonious underpinnings, TNT’s sexy, dark drama Claws, designed and destined to be a guilty pleasure and set to debut in the summer, was prominent amid the many upcoming series featured during Turner Networks’ presentation at the Winter 2017 Television Critics Association tour.  The five female main characters -- played by Niecy Nash, Judy Reyes, Carrie Preston, Jenn Lyon and Karrueche Tran -- give new meaning to the phrase “tough as nails.” And yet, at the core of the show is a heartfelt take on the depths of women’s friendships. (Tran, Preston, Nash, Lyon and Reyes are pictured left to right at top.)

Rashida Jones and Will McCormack are among the executive producers of Claws, set in a strip mall in Florida, but filmed in New Orleans.

During their session the actresses flashed their manicures. Nash’s, not surprisingly, had the most bling. Not unusual for her, she offered.  The role, however, is.

“I was excited to play my character, Desna, because she was so different from every woman I’ve ever played up until this point,” Nash said.  “The other thing was that there are so many layers to her.  On the surface, you might think here is this rough and tumble hard woman, but there are so many points in the writing that show all of her sides and all of her colors, and it was a blessing to play.  I know some women who don’t look like me at all, who wanted this role.  So, it wasn’t just about her being a black woman.  Women, period, were coveting this part.  I consider myself a very blessed woman to be able to be cast in this role and then to have these ladies with me.”

Only the pilot has been shot so far, but the cast immediately fell into an easy rapport, Reyes told me.  No stranger to working in a largely female ensemble, she was most recently seen as one of the title characters in the Lifetime series Devious Maids.

A boisterous Bronx native off screen, in Claws, Reyes plays Quiet Anne.  “She’s a lesbian [and very tough] as I created her,” Reyes said. “This was a wonderful opportunity to go against anything else I had played.”

Though Reyes loved the script, she felt “they should go after the real thing” and told her agent that she probably wasn’t right for the part.  Yet she worked on it and found the right space where Quiet Anne lives.

“I put myself on tape,” she explained. “No make-up, a cholo shirt, hair pulled back.” Quiet Anne sports neck tattoos and dresses in basic unisex gang banger.

It’s an interesting role because although Quiet Anne does not say much she expresses herself with her gestures and expressions.  Like the other women in the salon, Quiet Anne only wants a piece of the American Dream.  The women plan on achieving that by owning a nail salon, but for now they work at Nail Artistry of Manatee County in a Florida strip mall.

Nail Artistry is used to launder money for a pill mill in the same mall. Naturally the Dixie mob is heavily involved.  As tough as these mobsters are, they would be wise to remember they are dealing with Desna and Quiet Anne, both fierce warriors.

“I drive the van and provide the security,” Reyes said. “And I do pedicures.”

There may not be that many wallop-packing pedicurists, but Reyes described the 10-episode series as “authentic.” Some of that behind-the-scenes authenticity is that all of the actresses learned how to give manicures and pedicures, she explained.  Clips screened during the session for the show at TCA showed the actresses rather expertly doing nails.

Despite the gangsters, money laundering, beat-downs and life-on-the-edge challenges, there’s a sweetness woven into the show.  It’s clear these women love one another.

The well-mannered, upbeat Polly (Preston) looks and acts rich but has been away -- as in the way convicts returning to their hometowns tell people, “Yeah, I’ve been away.”  She wears a government-issued ankle bracelet, so Polly definitely has a juicy backstory.  The women rally around her, welcoming her back to the fold.

Preston recalled reading the script and how it resonated with her and jibed with what is going on politically. “It’s about women who are prevailing in whatever way,” she said, addressing the realism at the core of the show.  “Today, women are trying to prevail as much as possible.  And, you know, the matriarchy is a little compromised at this moment.  So, to read a script like this that’s about women, a tribe of women who are not after each other … certainly these characters are true sisters, and they’re family and they’ve created this situation where they can prevail together.  They don’t have to do it alone.”