Transparency and the Collapse of Traditional Upfront/NewFront Processes

By Jack Myers and Charlotte Lipman The Myers Report Archives

In Frenemies, Ken Auletta's latest book on the current state of the advertising industry, he describes an Upfront presentation as the seller's best attempt "to steer the buyer away from a pure economic analysis by stoking their emotions."  New data from MediaVillage suggests that the 2018 Upfront/NewFront presentation season focused heavily on economic analysis and failed to emotionally impact the buying community.  Vendors will need to strategically rethink their 2019 presentations to contend with the heavily transactional nature of current business decision-making.

A new MediaVillage survey of 265 key Upfront/NewFront decision-makers (available for download below) conducted in the 3rd quarter found that video media buyers viewed their Upfront/NewFront investments primarily through the lens of audience delivery.  Sixty-four percent of decision-makers ranked "confidence in delivery of ratings, reach and audience guarantees" as the leading factor of nine influential contributors to the Upfront/NewFront negotiating process when asked to identify the top three factors.  Fifty-one percent rated it most influential.  "Large audience reach" and "hard-to-reach targeted audience" were influential, following "brand-safe environment" as a critical contributor to purchase decisions.  Based on prior MediaVillage studies measuring reported emphasis on brand safety as compared to actual buying behavior, this may follow a trend of agencies overstating the actual influence of brand safety.

The focus on confidence in audience guarantees reflects the emphasis on accurate ratings estimates and recognition that clients are aware that media sellers and buyers have been complicit in projecting and accepting inflated ratings estimates.  The continuing reality of ratings erosion has become transparent to advertiser procurement officers, leading to demands that guaranteed ratings delivery more accurately reflect reality. Transparency issues are also leading to greater consistency between clients' demographic requirements and agencies' purchasing specifications. Traditional models of agency/buyer complicity in achieving mutual needs are collapsing as clients are placing greater demand for full process transparency.

MediaVillage did not report Upfront/NewFront economic data this year, as it has for the past several years, due to the difficulty in validating actual daypart and platform costs-per-thousand and volume.  The internal accounting used by agencies and sellers reflects inconsistent data as each party assigns different pricing according to its own needs and specifications, making it almost impossible to discern accurate year-to-year comparisons. 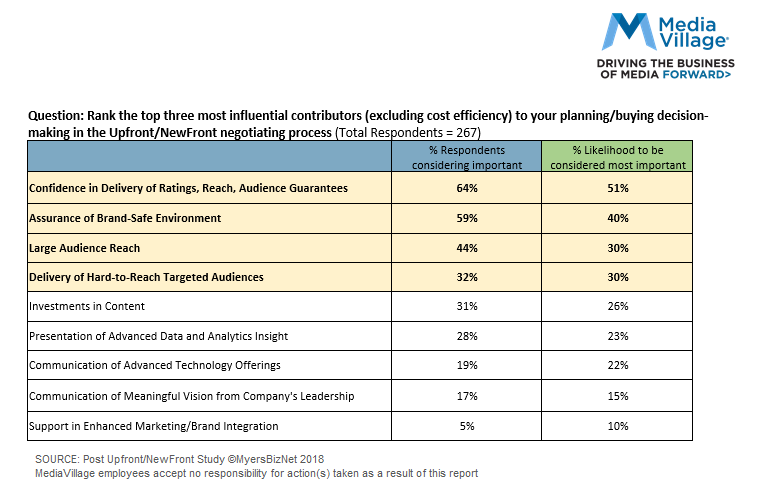 Investments in content, which reflect positive brand perceptions and are the primary reason why networks have historically hosted major Upfront events, was ranked important by just one-third of respondents and most important by only 26%.

The emphasis on transparency and ratings delivery can help explain Hulu's impressive Upfront performance.  Of 20 companies measured, Hulu came in first for most effective negotiating.  Among the Upfront/NewFront presentations of 22 companies, Hulu ranked first for most impactful.  For impactful presentations, Hulu was followed by NBCU, Turner, Discovery/Scripps and Google/YouTube.  For effective negotiations, among 20 companies Hulu was followed by ESPN, Turner, NBCU and Univision. 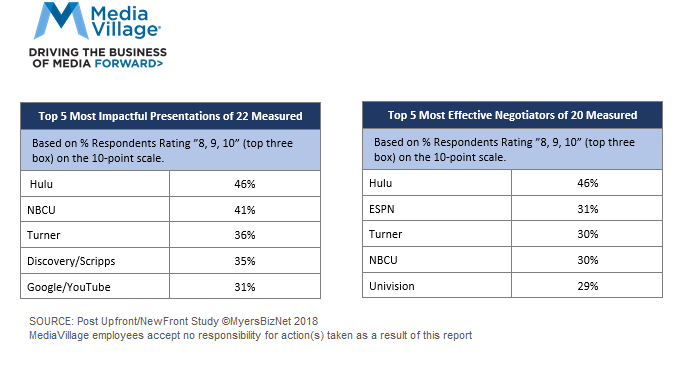