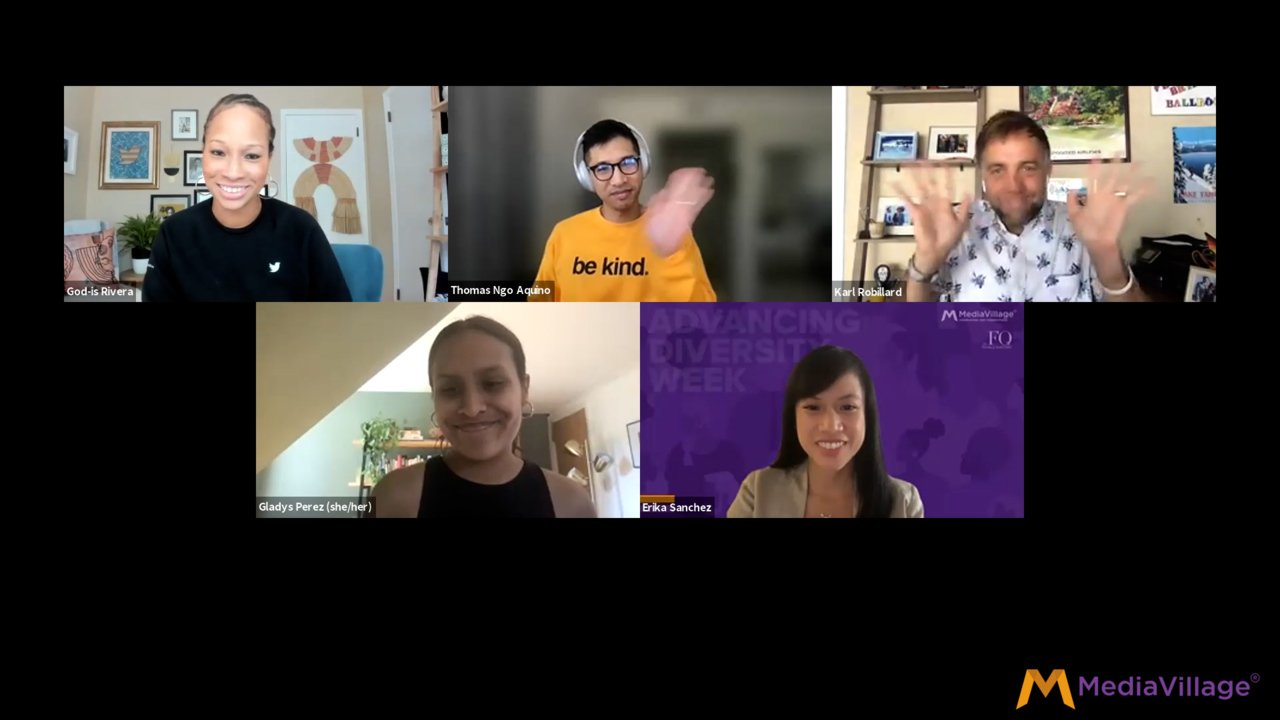 Twitter's core business is empowering people to get their messages out, but the Advancing Diversity Week panel entitled Twitter Presents: Cultivating an Inclusive Culture (September 20) was about how Twitter itself internally manages major news developments that are vital to its marginalized communities. The death of George Floyd was a touch point. (You can watch the panel in its entirety in the video above.)

"We have to show up for our folks on the platform, and quickly ramp up to understand the complexities of the issues at hand," said Rivera. "We can't sit on the sidelines. If we're silent, we're complicit."

The idea, said Robillard, is to "bring the company and the community together as a force for good. We want to feel the community, feel the inclusion. We need to do it all together." He pointed out that the last year and a half was exceptional, "With something awful and really, really traumatizing coming at us nearly every day. We probably need a year to recover from last year."

Perez said it's the Twitter team's responsibility to quickly process major news events for internal consumption, and also to bring in outside experts with diversity experience to provide context on the platform. "We create an emoji and say, 'Here's where you can donate.' We want people to feel proud of their company and feel supported -- they'll know these conversations are not taboo."

"Once it's happening and trending, like the murder of George Floyd, you feel it in the pit of your stomach," Robillard added. "It's something that was universally felt, and it had an impact on our focus and priorities. To the fullest extent possible, we democratize the process to help us identify the best way to focus." He said that by quickly reacting and connecting employees to resources, donations increased by 5X from 2019 to 2021.

"We build a little tool, connect the dots between a news event and making a donation, step back, and the Tweeps do the rest," Robillard said. "We empower employees, transparently and vocally, to make change. It's a team effort."

"When major events happen, it's our job to serve and feature the tweets from the most marginalized," Perez added. "We also find the professionals who identify with the community to provide racially informed therapy and put them on the calendar. And we link to resources for people who want to do more. We start with those marginalized folks and build out from there."

Aquino positioned what his teammates do. "We don't touch the product," he said. "We support people who touch the platform, and scale for other users -- adding depth and diversity to become more inclusive. It's not just from a white male cis-gender perspective. Traditionally, wellness has been defined by that group, but it doesn't reflect everyone in the world. That's why we bring in Indigenous, African-American and Asian speakers as part of culture-building at Twitter."

Twitter's philanthropic focus areas include online safety, sustainability, pay equity and equality. "But we have to show that we are listening to what is happening in the world, and that takes us into freedom of speech and civil liberties," said Robillard. "It becomes incumbent on us to connect the dots and bring in key partners, which may be tiny organizations based in Brooklyn. It's an age of reckoning for philanthropy."

Twitter's work shows that the old corporate approach -- with employee donations pooled to support only the most mainstream charities -- are no longer working. "We have to make sure we can give back to the many communities touched by Twitter," Rivera said. "And that may not mean giving to the big organizations that are traditionally supported."

Samira Abdul-Karim is a co-founder of Hyphens and Spaces and a diversity and inclusion expert who worked at several companies and universities. "At larger companies like Twitter, it's not completely unusual now to use these methods," she said. "Some companies take their own money and donate, and others will make donations to racial justice organizations, linked to their employees completing an action, such as an online survey. We've seen a big shift since George Floyd's killing."

One welcome development, Abdul-Karim said, is corporations -- in the wake of George Floyd and the murder of six Asian women in Atlanta -- that have moved to support African American- and Asian-owned businesses with internships, scholarships and training. "This approach recognizes the systematic nature of what we're dealing with," she said.

Abdul-Karim also recognizes the growing shift from large, pooled employee and corporate donations to mainstream groups. "Folks are realizing that with middle-of-the-road organizations there's not a lot of boundary pushing," she said. "You can't expect these organizations to make real change; that will come locally, from the grassroots."