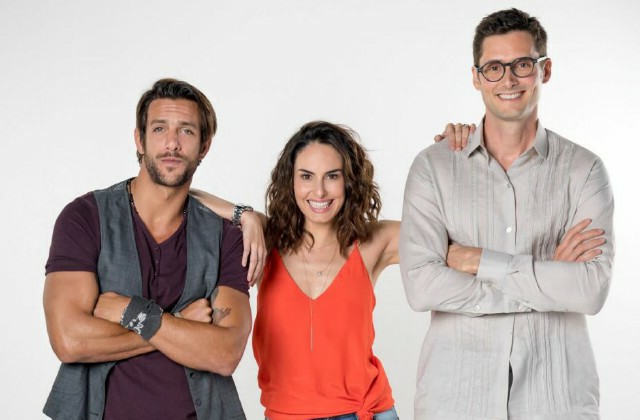 At first glance, one might assume Univision’s latest telenovela from Televisa, Doña Flor y Sus Dos Maridos(Doña Flor and Her Two Husbands), is a dark melodrama about a scandalous love triangle.  However, the new romantic supernatural comedy inspired by the Brazilian novel by Jorge Amado is much more of a standout than a done-to-death, fidelity centered drama.  Doña Flortells the story of a beautiful aspiring dancer, Flor, who falls for a handsome and charming swindler, Valentín. The two relocate to Mexico City so Flor can pursue her dance career, but after a year together, Flor loses Valentín to a fatal health complication and she finds comfort and newfound love in her lifelong friend Teodoro.  But Valentín is far from done with Flor; he returns from the great beyond as a sexy ghost to continue his romantic antics with the love of his life.

Described by Univision as “a seductive story about love and passion that explores the supernatural,” the series is lighthearted, charming and at times laugh-out-loud hilarious, particularly in the antics between Valentín and his right-hand man Chile (played by scene-stealer Ricardo Polanco).  Credit goes to the writers for the sublime balance of comedy and drama.  For example, the storyline about Flor’s father’s death and why she gave up dancing for such a long time is dark and emotional, while the plot between Valentín and Chile to steal money from a wealthy but dangerous family that owns casinos plays like a sitcom.

Set in the beautiful Mexican city of Tlaxcalixtlahuaca (a mouthful, I know), where superstitions, religion and belief in the afterlife are very much part of the culture and community, we see the ghosts of the deceased roam the world around them.  Nobody can see them, though, a plot device that recalls films like Ghostand Disney’sCoco.  The production design of Doña Flor is just as vibrant as the latter, with a beautiful score throughout the series and breathtaking scenery of the city’s landscape and historic architecture.

Ana Seradilla (Televisa’s La Viuda Negra) plays Flor as a woman who doesn’t take nonsense from anyone, whether it’s her overbearing, guilt-tripping mother or an overly confident fool that hits on her at a bar.  Flor is wonderfully talented, headstrong and determined to make her dreams a reality.  In a standout scene early in the series, we see a young Flor with her mother Margarita (played by Rebecca Jones) moments before her father’s funeral.  Margarita bitterly tells her, “Today I bury my husband, and you bury this dream of becoming a dancer.”  It is heartbreaking and raw, and it explains much of who Flor grows up to be and why she keeps her continued dream of dancing a secret.  Seradilla (Pictured top center) is to be commended for her performance of such a badass character.

Joaquín Ferreira (Netflix’s Club de Cuervos) plays the conniving bachelor to a tee while capturing two complex sides of the character: the vain and overly confident pretty boy and the more sensitive and head-over-heels in love romantic.  Valentín isn’t the type of man who ever sees himself settling down to get married and have kids, but meeting Flor changes all of that as he wants to spend the rest of his life with her.  Valentín is very much the archetype of “ladies want him, and guys want to be him” and Ferreira (pictured top left) plays the part to perfection.

Sergio Mur (Papa a Toda Madre) returns to Univision in Doña Floras the adorkable, hopeless romantic Teodoro who has been in love with Flor since they were childhood friends.  When he finally works up the courage to ask her to marry him, she rejects him after sensing a spark between her and Valentín.  When Flor moves to Mexico City with Valentín, Teodoro decides to improve on himself and travels abroad to benefit his career as a doctor.  Mur (pictured top right) plays the sensitive and sincere best friend – “always the groomsman, never the groom” -- and commendably avoids overplaying the “nerdy” stereotype the character could easily fall into.  Instead, we get a sincere, sensitive and relatable portrayal of a man who just wants to find love. He’s someone you truly want to root for, no matter how suave and sensual his rival may be.

What continues to astound me is the detail that goes into the many telenovelas that Univision premieres every season and how each series continues to transition into a cinematic direction, leaving behind the “sound stage” feel that these programs have had for decades.  From the cinematography and artistic direction to the performances and caliber of the talent, Univision continues to set new standards for entertaining, emotionally connective storytelling and high quality Spanish-language programming.  Doña Flor y Sus Dos Maridosis no exception.