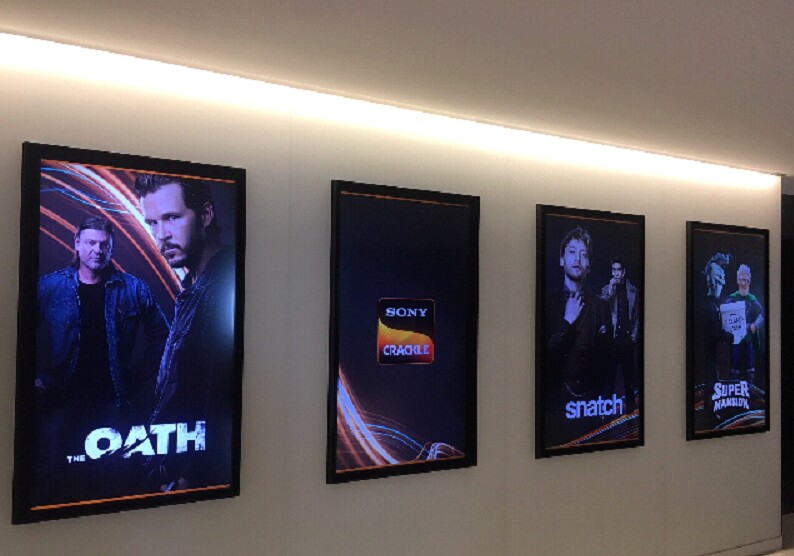 Sony Crackle wrapped up the second month of New York-based 2018 Upfront events this past Tuesday morning.  As was the case last April, the programming service, carried through smart TV sets, TV-connected devices and videogame consoles, directed its presentation at journalists.

Venue:  The 27th floor screening room of Sony’s headquarters complex, located at the corner of Madison Ave. and East 25th St.  That’s 26 floors up from a year ago, when press gathered at the ground floor space soon to be occupied by Sony’s Music Experience venture.  A breakfast spread was available at the outside lobby, with Sony Crackle series photos hanging on one side and scenes from classic Sony movies and TV series on the other.  Grade: 3.5 Jacks

Presentation:  Sony Crackle makes no bones about its status as an ad-supported programmer driven by the expanding universe of consumers with smart TV sets and other devices.  General Manager Eric Berger labels them “console users” who not only face an era of plentiful TV, but “an era of peak everything.”  Result:  more people are watching the service because of its programming variety and fewer but satisfying commercials.  “We’re mindful of the consumers’ ad experience,” Berger continued.  “The goal is to connect with that console user (base) and put that audience first.”  For advertisers, less breaks and time inside those breaks add up to a more attractive, effective relationship with audiences.   Grade: 3.5 Jacks

News:  Unscripted original series will be scheduled for the first time, produced through Sony’s Embassy Row.  One will be an eSports competition in association with NRG, a video gaming venture whose investors include modern-day sports legends Shaquille O’Neal and Alex Rodriguez.  The other is a 15-episode look at soccer, presented during the first two weeks of World Cup 2018 in June (one new episode per day).  Another new series will be Rob Riggle’s Ski Master Academy, coming in August.  That will not be the only scripted summer attraction.  Look for made-for-TV movies Office Uprising (workplace spoof) and Action Figures 2 (sequel to the 2015 theatrical release).  Six scripted series are in development, including Heart of Darkness (modernization of the iconic Joseph Conrad novel) and Limitless: Origins (prequel to the hit movie and former CBS series).  Grade: 4 Jacks

Host:  Berger had a solid command of the talking points and kept the pace moving.  Also, there was easy access for follow-up questions.  It would be nice to see him more often at TV industry conferences, given his other role as Chief Digital Officer at Sony Pictures TV Networks.  Grade: 4 Jacks

Star Time:  Riggle, along with Minnie Driver (Supermansion), Mira Sorvino (Startup) and Rupert Grint (Snatch) pre-filmed or taped intros to clips from their respective series; ditto Rodriguez for the eSports project.   Grade: 2.5 Jacks (Note:  If at least one of these celebs appeared live, the grade would have bumped up a half Jack.)

Overall Grade:  3.5 Jacks   Solid display of the venture’s mantra, working in more focus on who’s watching and a generous supply of content news.