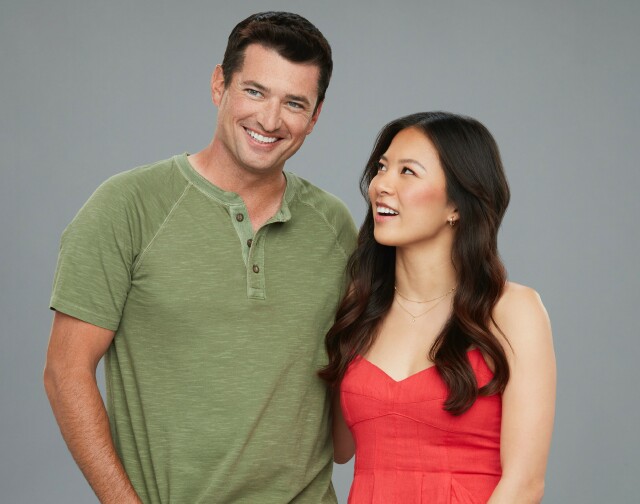 After 13 hugely successful films for Hallmark Channel, things got personal for network favorite Wes Brown on his 14th, Sweet Pecan Summer. "This story actually came from my wife," he proudly reported during a recent chat with MediaVillage. "I got credit for it and executive produced it, as it was purchased through my production company. But that being said, the story is loosely based on a story about my wife Amanda's aunt Carol and a piece of property she was selling. Some things were changed, but real people and real-life events informed this really nice story. When we shot it, knowing everyone was employed because of [my wife] was really, really, cool."

Sweet Pecan Summer tells the story of Amanda (Christine Ko, pictured at top with Brown), a cosmetics company product developer who is frustrated because she can't implement any fresh ideas. Already longing for a break, Amanda gets the opportunity when her favorite aunt, Carol (Lauren Tom), calls to inform her she's starting a new life chapter (with a new man) and needs to sell her pecan farm. Amanda agrees to help her sell. However, when Carol hires Amanda's ex-boyfriend J.P. (Brown) as the broker, there is soon more than just a property sale at stake. Working together proves a challenge for the former school sweethearts, but given all the time they spend together, Carol's matchmaking might just rekindle an old flame.

Brown's association with Hallmark Channel dates back to 2009 when he shot the aptly titled Love Begins. He just didn't know at the time what a love affair it would be. "You're blowing my mind," he laughed when reminded of the title of his first Hallmark movie. "I've never thought about that and I'm gonna roll with it! I had no idea whatsoever as Love Begins was just a regular audition in a long line of all the others. I never thought it would lead to continuous work for over a decade. I think what any actor wants most is a place to call home, but I never thought it would be Hallmark! I'm very lucky and I will ride that wave for as long as they let me."

Throughout his Hallmark tenure, Brown considers himself fortunate to have worked alongside some of their established leading ladies like Kellie Pickler, Jill Wagner, Rachel Boston, Jessy Schram and Jessica Lowndes, to name a handful. "There are still some on my bucket list," he laughed, adding that he was delighted to able to add his Sweet Pecan Summer co-star Christine Ko to that ever-growing list. "She is really funny and really talented," he shared.

"Our movie is very comedy-driven, so they let us have fun," he continued. "We'd do one scripted take, maybe two, then the third one was whatever we wanted to do. We hired some really funny people here; Christine, Lauren Tom -- who's got a resume a million miles long -- and then Chase Ramsey, who was coming off Book of Mormon. I had a great time with the entire cast, but especially Christine; the laughs off camera were just as much as they were on. It was a great time."

Adding to the joy of the project was Hallmark's decision to put together a largely Asian cast, something not part of the original story, but welcomed by Brown as a part of the network's ongoing inclusivity and diversity initiative. "As this was based on my wife's family, it wasn't originally a part of the story," he revealed. "But the [on-going] talks definitely got into that. Everyone involved wanted to go with Christine, who is Taiwanese American, so [the movie] has a very big, diverse Asian cast. We had a lot of diversity across the board on this one. This actually started as a Christmas movie, then it went to fall, back to Christmas, back to fall, until we finally settled on summer.

"[The diversity] really broadened everyone's horizon," he added. "If this hadn't happened, I wouldn't have gotten to work with someone like Christine or Lauren. So, to get to work with so many people from different backgrounds and learn about them … I come from the Baton Rouge, New Orleans area, and Christine's from Georgia with a Taiwanese background, so it was a very interesting melting pot with a lot to talk about; different types of foods, different types of holidays, all kinds of really interesting stuff … a lot of fun and so very, very, nice."

Asking Brown to identify his favorite Hallmark project is impossible. "I love every single one I've ever worked on for different reasons," he said. However, this one does have a special place in his heart. "This was absolutely a favorite because of the personal aspects," he shared. "I'm a big sports fan and this one is a little baseball heavy, as my character is an ex-player, so I got to put on a glove. It's a little like a real-life Field of Dreams in some ways, so there are aspects of this that made it 100% one of my favorites."

Next up for Brown is a Hallmark Christmas movie, one on which he's thrilled to be able to break some rules. "It's set in South Mississippi," he revealed in closing. "It doesn't snow in South Mississippi much, so this is a big one with no snow and a musical element. We are breaking rules left and right -- which is very cool."

Sweet Pecan Summer will be telecast Saturday, August 28 at 9 p.m. on Hallmark Channel as part of their annual Summer Nights programming event.