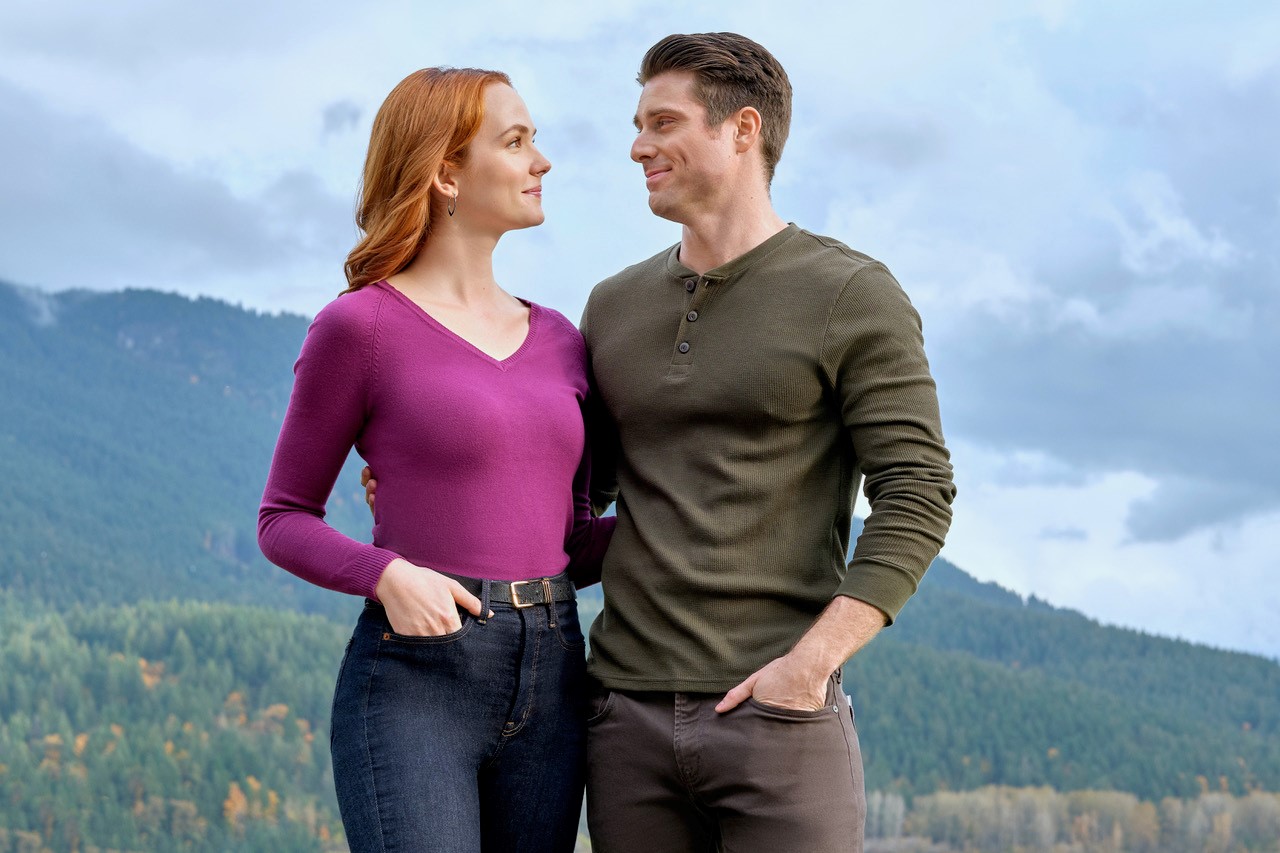 This weekend When Hope Calls star Morgan Kohan (pictured at top) switches her corsets and period clothing (along with her beloved Lillian Walsh character), for jeans and present day in the Hallmark Channel premiere of Love on Harbor Island. In the film, co-starring Marcus Rosner (pictured at top), Kohan stars as Lily Summers, a Seattle based interior designer returning to her hometown of Harbor Island to help run her Aunt Maggie's (Brenda Matthews) bed and breakfast. There, she meets Marcus (Rosner), a handsome seaplane pilot who's devoted his life to delivering rescue dogs. As she gets to know him, she starts questioning the pace her own life and that maybe her ambitions and big city life are misguided.

The British Columbia native was delighted her hometown could provide a perfect backdrop in the film and she hopes the movie's lesson is something everyone will take-away. "It's a nice message of, 'Maybe what you're meant to like is not necessarily what's perfect for you, and you need to figure that out on your own'. Maybe taking the blinders off for a moment and seeing what's around you, is something I really related to. COVID-19 has kind of done that for me."

"It's like you have to look at what's been working and see if it feels right. If anything, that's a positive to come out of this [pandemic]. It's forced me to slow down and that's been nice. I'm sure it's the same for everybody, as so much is up in the air and unknown. We have no idea when everything is going to reopen, or if it will, and if it does, what kind of work will be there afterward? If opportunities arise now, you really have to try and forget being so specific about things and be thankful for the opportunities presented, hope they will continue to come and grab what's in front of you and what's working right now."

The fact she's playing a character named Lily, wasn't lost either. "It's funny," she laughed. "I talked to the director and writer after filming, and mentioned [the names] Lily and Lillian, but I didn't put the two together at all. It just worked out that way. I guess I'm only playing people with that name from now on because it's [much] easier and I won't get confused."

"The dog rescue element for sure attracted me to this also," she continued. "I thought if I get to work with a bunch of dogs, sign me up and I'm there! I also really liked the relationship she shares with her best friend Christie (Emma Cam) (pictured below right) . I had an awesome costar in Emma, as soon as we were both cast, she reached out to me expressing how much she couldn't wait. It was such a good vibe going in." 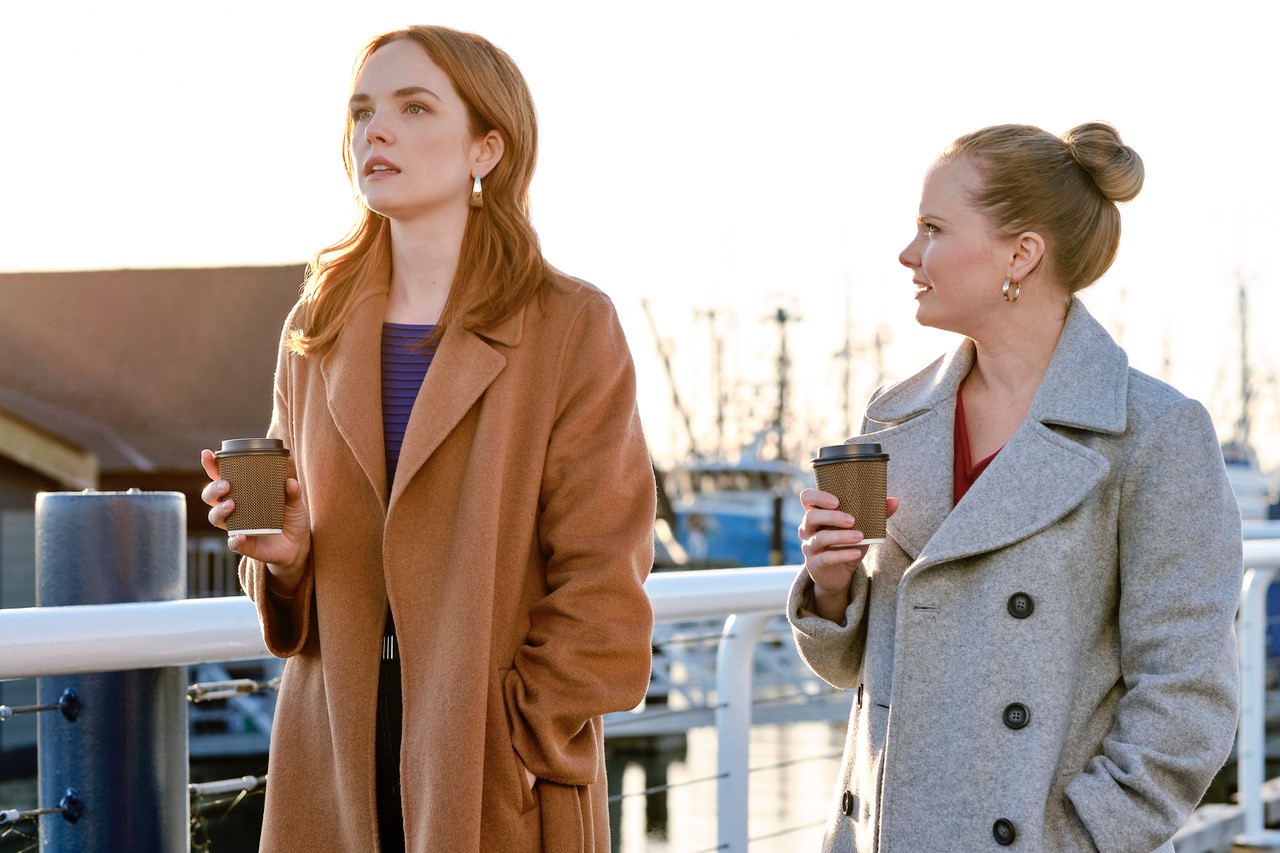 And the bonuses didn't end there. "Everyone told me what an awesome guy Marcus is and how I'd have a great time. He helped make it a great experience."

The actress is thankful for her B.C. roots, as she's managed to continue to work, albeit, differently, during the COVID-19 shut down. "I've been lucky having gotten some work here and spending time with my family," she said. "It's definitely a bit different, and they've handled it so well that it feels safe. Going to a set feels safe too because it's so regimented. We have a temperature check before we go anywhere. Everyone is wearing masks and social distancing. They limit the number of background actors, the crew has gone down in size, and we try and [film] outside instead of indoors.

"The funny thing is we've had to take out any hugs, high fives, or any of the kind of stuff that would normally exist in the Hallmark world," she explained. "It's interesting trying to come up with having a family connection and for it to not look awkward. Like if I come home and see my parents, we won't run over and hug. Instead, we do whatever we can to make it feel real, like giving mom a bunch of plates so she can't hug you, stuff like that."

Kohan is hopeful her next Hallmark job will be season 2 of When Hope Calls, admitting "We don't have word yet, but we're all optimistic". She's thankful to legions of #Hallmarkies who have voiced how much they want the show to return. "The fans recently did a tweet-fest requesting season 2 and showing their love for the show and characters," she shared. "It was amazing and happened months before the first season had finished! I really do feel lucky being a part of Hallmark, having the support of everyone that loves the show and the network. I never take that for granted."