With His FX Show, Artist David Choe Created the Bravest Thing I've Seen on TV, Ever 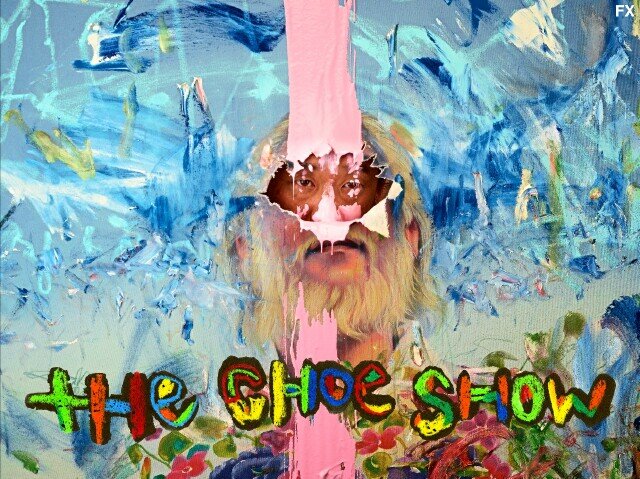 Maybe I was born on the wrong coast, or in the wrong tax bracket. Maybe the circles that I traveled weren't cultured enough during my formative years, or maybe I just wasn't artistically adventurous enough on a personal level. I mean, there must be some reason for the fact that, beyond being the artist behind Jay Z & Linkin Park's Collision Course album cover -- and honestly I didn't even know that until recently -- I hadn't had the pleasure of discovering renowned L.A. artist David Choe and his illustrious body of work that spans no less than twenty years. Choe's latest endeavor is The Choe Show, which debuted in its entirety last month on FX and is now streaming on FX on Hulu.

David Choe is a genius in that classic sort of "tortured artist" kind of way. I have a longstanding theory that the smartest and/or most emotionally intelligent people (typically creatives) are usually the most sullen-seeming, or even depressed, because they, unfortunately for them, are too able to see through all of life's bullshit, so much so that they can't just accept the façade of truths that seems to placate everyone else. Or maybe they're just sad because they can see through their own bullshit. Either way, Choe feels as though he's some combo of both, and his show feels like a deep dive he takes into the psyches of others in order to better learn about himself. In turn, the viewers of this (so far) four-episode masterpiece undoubtedly learn something of themselves as well. I mean, how could they not?

On the surface, The Choe Show is a talk show. Famous people show up (sans self-promotional motivations) and get interviewed by our host, Mr. David Choe. Below the surface, though, Choe acts as somewhat of an emotional shaman to both his on-camera guests, and to us, his other guests -- guiding us all on a trauma-filled journey of memories, revelations and self-discovery that the words "relatable" and "empathetic" just don't seem to cover.

The visuals on this show are nothing less than hyper-impactful. Choe's use of different mediums (canvas, paper, videos, music, sculptures, murals, etc.) and tools (acrylic paints, oil paints, spray paint, white out, clay, pens and even his own blood, seriously) give the series a curated look, not unlike a creative yearbook or journal -- or a serial killer, now that I think about it. The editing, the use of color, the authentic footage of his childhood -- hell, even the fact that his actual childhood home is the "set" from which The Choe Show is shot -- all make this thing what it really is: a virtual video installation. What makes this particular installation truly stand out -- besides every single thing about it -- is its focus on mental health and emotional well-being.

It shouldn't be understated exactly how daunting the task of looking inward can be, let alone sharing it. Choe very recently expressed a similar feeling in an Instagram post about watching the premiere of this incredibly personal project in front of his mother:

"I don't want to admit I cried very hard the morning of my @thechoeshowfx debut. Because honestly, I would've rather not done it. It's safer and much easier to live a quiet life. It takes a lot of trust and life force to share that much of me with you. To be naked without armor or any masks in front of strangers. But I do know I am loved and supported so I can take any dark forces that come. I finally am able to love and trust myself, so I did it … I shared it with the world."

If you ask me, the guests on this show, as stellar as they all may be -- and they're good, ‘cause we're talking about Rainn Wilson, Asa Akira, Will Arnett, Denzel Curry, Maya Erskine, Steve-O, Kat von D and her husband Leafar Seyer (among others), all of whom might be some of most interesting people on the planet -- aren't even the point. I mean, they are, but they're not. Listening to Kat von D discuss being at odds with her mother, hearing about Leafar's intense relationship with his now-deceased father, or watching a very pregnant Asa Akira do a roleplay with Choe where he questions her porn-related life choices as a disgruntled teenage version of her unborn son -- all of it feels like the kind of therapy most people couldn't afford. I watched this series with someone who suffers from depression, and, as someone who has struggled with those feelings as well, and I can tell you personally that "cathartic" barely covers this thing.

Besides being the bravest thing I've seen anyone put on TV in recent years, if not ever, it's shortness of length makes me a little sad. These four episodes were not only labors of love (love for other people, love for the idea of loving one's self, etc.), but also an investment. Yes, Choe says right off the bat that he paid to make this show with his own bread. That wasn't for hype, or clout, or even to make more money. It was to give us four episodes that had been whittled from hundreds and hundreds of hours of footage, to illustrate that above all else, none of us is as alone in all this as we think we are. It was an investment into us.

We need more of this. We all need so much more of this. Go to David's website (davidchoe.com). Download his workbook. Do it. Be honest with yourself.

The Choe Show is now streaming on FX on Hulu.