YouTube's "Champaign ILL" Is as Ill as it Gets 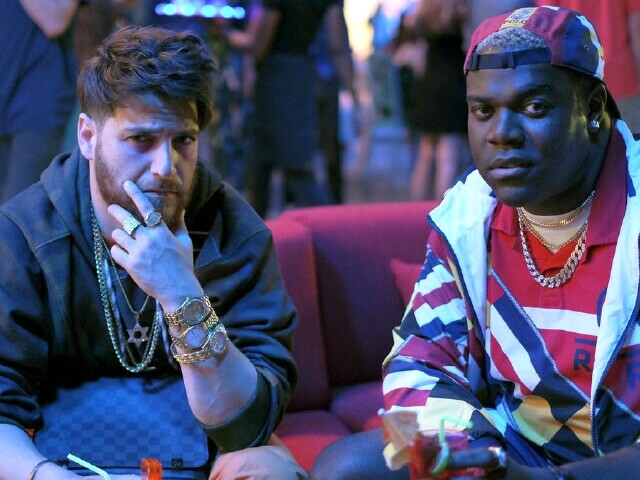 The series opens in 2003 with three best friends in the title city talking about what they plan to do after high school.  Ronnie (Pally) and Alf (Richardson) have “normal” plans.  Ronnie got into Yale and plans on doing some good in the world.  Alf plans on marrying his high school sweetheart.  All good -- at least until Lou (Pharoah) says what he’s doing.  Lou is a rapper who just got signed, and his life is about to take off.  Just like that, Ronnie and Alf up and drop everything.

Fast-forward fifteen years, and Lou is living the rap star dream, with Ronnie and Alf in tow as his crew.  That is, until Lou takes an unfortunately fatal fall during a music video shoot.  Now, Ronnie and Alf have to figure out how to live “normal” lives after losing their best friend/lifestyle benefactor.

First of all, I respect the hell out of this show for not half-assing the hip hop.  The soundtrack, which includes “Jet Lag” (the fake song that Lou was shooting a video for) and 2 Chainz’s “It’s A Vibe”, is chock full of legitimate tracks, rather than the glorified grade school poems that usually pass for music on popular sitcoms.  Even the original stuff made for the score is pretty up to snuff.

Secondly, Pally (pictured at top, left) and Richardson (top right) are an unexpectedly perfect comedic duo.  Their chemistry is crazy good, and as a fan of both of their previous works I’m a little shocked this pairing never occurred to me before.  It seems so perfect in retrospect. Their timing is spot on, and both are veritable masters of delivery.  Funny stuff aside, they have crafted loveably flawed characters.  Pally can go from quippy smartass to wounded puppy in 0.2 seconds, and Richardson’s ability to go from completely confident to totally awkward in the same amount of time is an enviable trait that he has in spades.  It makes sense that they’re both also executive producers, because it’s their well- crafted performances (especially in the first two episodes) that really set the pace for the show as a whole, and I’ve no doubt that the freedom EPing allowed them had something to do with that.

More than just dick jokes and very accurate pop culture references, Champaign ILL brings the realness as well.  Like with any truly good entertainment, the whole thing is informed by emotion.  Loss, insecurity, shame, comradery, anger and absurdity -- these are just some of the chisels with which this piece of work is carved.  For every up there’s a down, even if it is overlooked by our leads (who spend most of their time in some hilarious state of optimistic denial).  This disastrous duo spends plenty of time bringing the laughs, but time and time again they’re forced to deal with the realities of their situations.  Thankfully, Pally and Richardson are more than capable of bringing the drama, too.

The attention to detail is worth a huge mention as well.  Writing-wise, the entire season is beautifully interwoven.  There are so many subtle moments of foreshadowing that get paid off in glorious fashion, as well as callbacks and recurring bits, that seeing them pay off the first time around is almost as much fun as watching them lay the groundwork for those moments on your second binge sesh.  Yes, I watched the entire season.  Twice.  I won’t spoil anything, but just watch Ronnie and Alf’s hair throughout the show.  Details, baby.

Of course, occasionally there are times when these dudes are making decisions that no human being would ever make, but the magic of Champaign ILLis that it never gets frustrating. Admittedly, they are two pretty ridiculous people, but something about their misguided optimism and loyalty to one another is hyper-endearing.  Not to mention that their collective plight is entertaining as hell.  Something about them just makes you want to see them win.

In all honesty, there really isn’t much more I can say about this show without giving some of the best stuff away.  Half the fun is discovering all the little ways that this show is dope as you watch it.  Truth be told, and this is not a promo, after seeing the first three episodes on YouTube for free, I actually paid for YouTube Premium just to see the rest of the season.  Make of that information what you will.  Champaign ILL is ill as f**k.